The History of Automobile Racing on the Historic Half-Mile Dirt Racetrack at the Cowley County Fairgrounds, Winfield, Kansas
Page 1

Fairs were representative of the idealized public version of life in rural communities in Kansas in the early 1900s in contrast with the normally boring everyday life actually experienced there.  That idealized concept, of course, included the excitement of automobile racing.

The earliest known automobile race run in Cowley County, Kansas took place on Labor Day, September 4, 1905 on a half-mile racetrack in Athletic Park on the east bank of the Arkansas River on the west side of Arkansas City, Kansas.

The half-mile racetrack at the Cowley County Fairgrounds in Winfield was originally laid out in the summer of 1872 and has been used for horse racing off and on since the fall of that year.  The corners were dredged out in the summer of 1883, more so near the inside of the track to give the effect of a slight banking to the turns, thus making the racetrack into a rare "dish" oval.  The size, shape, and location of the track have not been altered since but flood sediment has filled in some of the original dish bringing the surface up almost to ground level.

The racetrack lies just a couple hundred yards east and north of the Walnut River and outside the levee protecting the city of Winfield so the track is often covered by floodwater.  The track surface is mostly silt that does not pack down well so the racing surface for cars has always been very rough and dusty.

Touring promoters presented a number of exhibition races on the track in the early 1900s.  In those races, the promoter either owned, or contracted for, the cars and drivers on the program with the emphasis placed on providing a good show for the crowd rather than on presenting a real competitive event.

The Cowley County Fair Association set aside $40 for a planned a time trial event where area cars could compete against the clock at the Cowley County Fair in September of 1903.  They planned to have contestants run two laps of the racetrack with the car with the fastest elapse time collecting $25 and the car with the second fastest time being paid $15 but no published results of that event have been located to date.  It is doubtful that the event even took place.

There were a number of legitimate automobile races contested there as well.  The earliest known of those are:

Winfield hosted a major horse race meet each summer and auto racing was added as a last day attraction to both those and to the Cowley County Fair each fall.  The increased crowds they helped generate in 1927 prompted the City of Winfield to construct a larger new grandstand before the races were run again the following year.

The Winfield racetrack was occasionally utilized as a test track for racing cars in the late 1940s but organized auto racing did not return until stock car racing began as just another attraction added by fair secretary, Noble Bradbury, to the annual Cowley County Fair:

The City of Winfield owned the fairgrounds and required that a local civic organization sponsor such events in order to receive the City's permission to use the facility.  The following list of race dates may not be complete and race results from some of the dates that are listed have not been located yet.

This is only one page of this 3,500-page website so, if you have not found what you are looking for, you may wish to use the “Site Search” button below that will allow you to search just the pages on this web site for what you might wish to see.  A “Site Map” of those 1,500 pages is available below as well.

Take some time and enjoy exploring.  Come back another time and explore some more.  You can also send e-mail to Bob Lawrence at: sprintguy @ cox.net

The History of Automobile Racing on the Historic Half-Mile Dirt
Racetrack at the Cowley County Fairgrounds, Winfield, Kansas 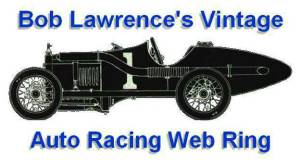